A reader argued that the moon is receding at a rate that limits the age of the earth to less than a million years. Here's the truth.

According to Physicist Donald DeYoung:

One cannot extrapolate the present 4 cm/year separation rate back into history. It has that value today, but was more rapid in the past because of tidal effects. In fact, the separation rate depends on the distance to the 6th power, a very strong dependence ... the rate ... was perhaps 20 m/year ‘long’ ago, and the average is 1.2 m/year.

Because of this, the Moon must be less than 750 million years old—or 20% of the supposed 4.5 billion-year age of the Earth-Moon system. 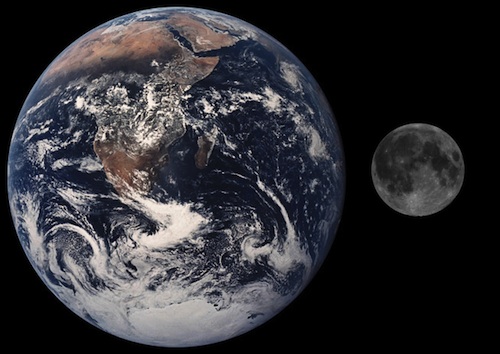 I've looked at the receding moon argument before. The person who presented it the last time simply did bad math. I corrected his math, and the objection disappeared.

Yours is a little more complicated, so I did some research. The initial problem that stood out to me when I read your email is that you cite one person as though his opinion represented good science. Science, by definition, requires convincing other scientists of your viewpoint. It's called "peer review," and even creationists admit it is a necessary part of scientific research.

http://www.talkorigins.org/faqs/moonrec.html references numerous studies that disagree with Donald DeYoung. The arguments are more complicated than I can take up myself, but it is clear that DeYoung—who believes the earth is young because of the Bible, not because of science—has only other Bible-believing scientists on his side, and even then very few.

Even if the arguments are over a layman's head (and I'm a very skilled layman when it comes to these things), the point is that you can't overthrow evolution with a hypothesis held by one man that has been repeatedly refuted in scientific journals by other scientists.

Addendum #1 to My Answer: The Moon Does Recede

It is true that the moon is receding (moving further away from the earth) at about 4 cm/year. If you extrapolate that back in time, then 4.5 billion years ago the moon would have been about 138,000 miles away rather than 250,000. This is far enough away to be no problem for a 4.5-billion-year-old earth.

Everyone agrees, as you will see in the TalkOrigins.org link above, that the recession rate would not have been consistent, but calculating what it would have been is complicated, and scientists disagree.

Addendum #2 to My Answer: Burden of Proof

My answer sent the original writer to another web site with complicated explanations and formulas on it. I'm assuming that most of my readers, like myself, do not want to devote the next two or three weeks to learning and calculating those formulas themselves.

The subject of the recession of the moon is not an argument I am employing as evidence for evolution. The original inquirer was employing it as an argument against evolution. I am very thorough in the research I do defending the science behind evolution because when I employ arguments, the burden of proof is on me.

I expect the same of those who would disagree with me.

Return from Receding Moon Argument to Questions and Answers

Or return to the Proof of Evolution home page