Is Nessie, the Loch Ness Monster, really a plesiosaur trapped in a giant inland lake, descended to us from the Jurassic Period?

Although there's nothing conclusive, and although it is very unlikely that Nessie exists, I was amazed at the evidence that suggests there really is a 20-foot long creature resembling a plesiosaur in the deep waters of Loch Ness in Scotland. 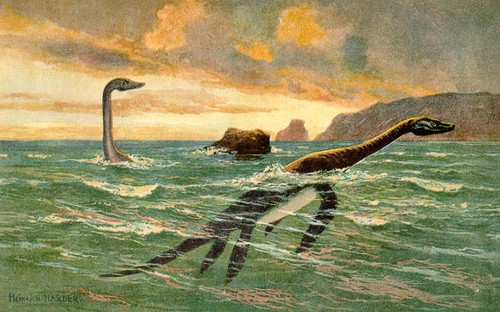 History of the Loch Ness Monster

Before any evidence is given, you should know that the story of Nessie goes back to the 500's, when an Irish monk by the name of Columba found some Picts burying a man. They explained that a water beast and had mauled and killed the man in the river Ness, which runs between the Loch Ness and Inverness on the north coast of Scotland.

Apparently anxious to prove the power of God—I won't say put God to the test (Matt. 4:7)—St. Columba ordered one of his followers into the river. When the beast appeared on cue, the saint made the sign of the cross and ordered the monster away. It obeyed, and the Picts were converted.

After that, there was mostly silence for approximately 14 centuries. 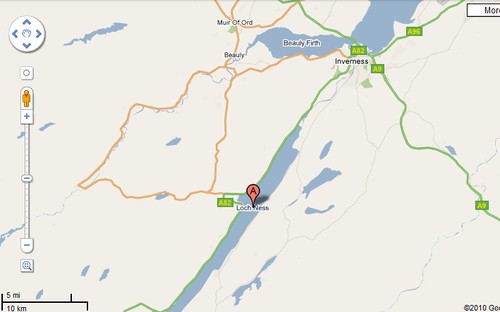 Google map of Loch Ness in Scotland. The River Ness runs between the loch and Inverness. 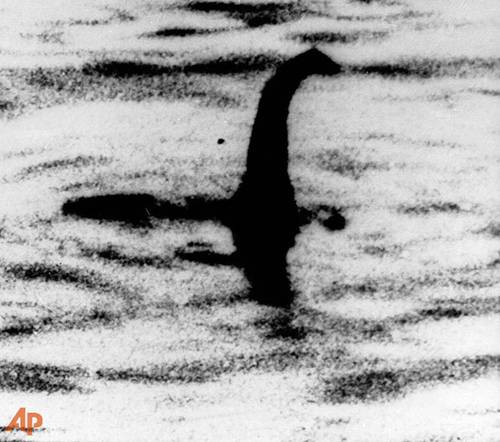 This most famous of images of the Loch Ness Monster was admitted to be a hoax in the 1990's by Christian Spurling, done with a toy submarine and a sculpted head and neck.

Before I saw the film, I thought the Loch Ness Monster was a load of rubbish. Having done the enhancement, I'm not so sure.

The high rate of ascent and descent makes it seem very unlikely that they could be fish, and fishery biologists we have consulted cannot suggest what fish they might be. It is a temptation to suppose they might be the fabulous Loch Ness monsters.

A recent attempt to find the monster occurred in October, 1987 when 20 cruisers methodically swept the Loch with sonar equipment bouncing sound waves from the surface down to the bottom and electronically recording any contacts. Many salmon were found, but no monster.

We went from shoreline to shoreline, top to bottom on this one, we have covered everything in this loch and we saw no signs of any large living animal in the loch.

Nessie Can't Be a Plesiosaur

The osteology of the neck makes it absolutely certain that the plesiosaur could not lift its head up swan-like out of the water.

Of course, that's how most sightings have been reported.

What About Some Other Large Marine Animal?

Is Nessie a sturgeon? Atlantic Sturgeon have been found in UK rivers and can grow to 14 feet in length. Or a pilot whale? A large seal? Were St. Columba's Picts attacked by a walrus that made its way down the River Ness?

Acipenser sturio, the Atlantic Sturgeon
These can grow to 14 feet and 700 pounds!

We'll probably never know. Sonar surveys were unable to turn up even a sturgeon in the waters of Loch Ness.

It should also be noted that as the ability to record sightings has increased with the advent of cell phones and digital camcorders, the sightings have fallen off, not increased. This is a pretty good sign that most previous sightings of the Loch Ness Monster were probably due to man's keen imagination more than his keen vision.