This page covers my favorite creation vs evolution debates, most on video, and my answers to videos, web sites, and books suggested by readers ...

Jump straight to debate lists below

First, though, I would like to tell you the story of my very first evolution vs creation debate. At that time, I was the creationist debating against the evolutionists.

Would you like to make your own contribution to the creation vs evolution debate?

A Creation vs Evolution Debate Story

Long ago, in the early days of the internet, I was a member of CompuServe (remember them?). I debated, uh, religiously in their religion forum (pardon the pun). 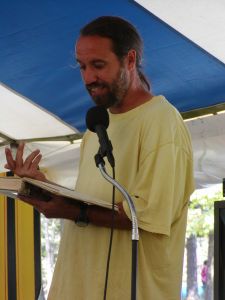 Teaching at a festival in 2003

I thought of myself as being eminently successful in my debates, and perhaps I was because I didn't just alienate everyone. I found a lot of people beginning to flock to my side in my arguments.

Then, one day, an evolutionist dared to appear in my religion forum. I put on my super hero cape and flew to the rescue, saving my CompuServe colleagues from this horrendous heresy.

I knew I was well prepared. I had watched Dr. Robert Gentry's creation show three consecutive Saturdays. Why, with three hours of teaching from this leading creationist, I would vanquish those evolutionist deceivers!

I was not prepared for the possibility that Dr. Gentry would simply lie on television. I wasn't aware that Christians did that, and I was shocked to find out I was peddling information that was known to be false, sometimes for decades.

That revelation would lead to a massive change in my life.

Converting to Evolution
and
Vanquishing the Institute for Creation Research

Unable to obtain information I could trust from creationists, I was forced to ask the evolutionists to help me learn. They provided sources. Their stories could be verified in newspaper reports and magazines.

I was skilled at using the Reader's Guide to Periodical Literature, which was an essential research tool in the days before most periodicals became available online.

The creationist side of the creation vs evolution debate was impossible to verify in the guide, while the evolutionists repeatedly gave me reputable, reliable sources I could research at my local library. I was forced to trust them; it appeared they were the only honest people in the debate.

Fortunately, someone came to my rescue—or so I thought.

A man posted on the CompuServe religion forum saying that he had graduated from the Institute for Creation Research's college.

He posted 15 questions that "no evolutionist had ever answered."

I had only been researching the creation vs evolution debate for three weeks, but it was simple to answer all 15 of his questions. I then asked him to please tell me where I was wrong, because I had been a young earth creationist just a month earlier, and I would love to continue to be one.

He didn't answer me directly. He simply wrote a scathing reply to the whole forum, telling us all that we were dishonest and close-minded.

To this day, I'm waiting to meet the honest creationist who actually knows what he's talking about and handles the data honestly. It's been 15 years. Maybe John Baumgardner is close.

I have a page on why creationists win most evolution debates ... as long as they're limited to a couple hours. Long internet debates, such as was the case with my own debate described above, always result in the embarrassment of the creationist.

I also have a guest article on young earth creationist debate tactics, which applies mostly, though not exclusively, to online message board debates.

On to the debates!

for $5.00), prompting a firestorm of debate and discussion.

The best debate and discussion begins here. It's best because it's a debate Ray Comfort is purposely engaging in with Eugenie Scott of the National Center for Science Education. I'll keep the links in the list below, in correct order, as they come out:

I include two Kent Hovind creation vs evolution debates because, simply put, he's interesting. I don't think he's polite, and the fact that he's in jail for tax evasion is a good sign that he has honesty problems, but he brings up interesting issues in an interesting way.

The following two debates are very good. Both Shermer and Waggoner are well-prepared. Timed debates like this favor creationists, who are usually limited to arguing against evolution in a "drive-by shooting" format, rather than presenting a well-rounded case for their own theory. One blogger described it this way:

There is yet another reason never to engage in a live debate with a creationist: They typically use their time to make numerous rapid-fire claims, often erroneous, all spewed out in a barrage that is impossible to rebut in the time allowed. This is sometimes called the "Gish Gallop," named after Duane Gish and mentioned in that Wikipedia article about him.

Kent Hovind is a master of this technique. In fact, he's has a series of arguments, complete with slides, that he pulls out repeatedly. They're all memorized, and his ability to pull them out, not just from his memory but his computer as well, at a moment's notice, is simply phenomenal.

Dr. Shermer was befuddled by Hovind, and afterwards he suggested he would never debate creationists again. Waggoner, on the other hand, handles Hovind expertly. I personally was thoroughly impressed.

This first Kent Hovind creation vs evolution debate is with Dr. Michael Shermer, editor of Skeptic magazine. You can see the difficulty Shermer has knowing how to handle the barrage of claims.

Okay, this one's the best creation vs evolution debate I've ever seen. You'll love this!

Hovind's interesting, but in this case, Dr. Ben Waggoner is just as—perhaps more—interesting. Don't be fooled by Waggoner's introduction! Think of it as a snake coiling.

In fact, at the 1 hour, 26 minute mark, I noticed that Dr. Waggoner had gotten Hovind's goat. It's really the first time I've ever seen the remarkably calm Kent Hovind get irritated in a creation vs evolution debate.

You'll also notice that the video's not unbiased. Only Hovind's slides are shown.

My Creation vs Evolution Debates

The following are some of my answers to anti-evolutionists, my own personal creation vs evolution debate. (I avoid calling them creationists; I myself am a creationist—I believe in God as Creator—and I don't object to evolution at all.)

Sadly, one of the strongest pieces of evidence supporting evolution is how easy it is to answer the arguments of creationists.

Do you have an argument for or against evolution?

Present your side of the creation vs evolution debate!