Scientific hoaxes happen. Some scientists do indeed fake their discoveries.

A couple examples are given in this report by Discovery. Wherever you have people, you will have dishonesty, from unavoidable bias to outright chicanery.

On the other hand, every major hoax has been exposed by mainline scientists and reported in scientific literature. Far from a conspiracy or cover-up, science has proven to be set up for effective self-policing.

Today, I saw a video discussion between Wendy Wright, a representative of Concerned Women for America, and Richard Dawkins, the famous atheist scientist. In the discussion, Wendy Wright refers to the discovery of a tooth (actually two teeth) said by one scientist to belong to a primitive hominid, named hesperopithecus and popularly known as "Nebraska Man."

Artist Amedee Forestier's illusration of Nebraska Man for the London News in 1922. This was an exercise in imagination, of course, as such features cannot be determined from two teeth.

The tooth turned out to belong to an extinct pig.

Ms. Wright refers to that discovery as "fraud." She says that science should not "censor out the evidence that goes against evolution."

There's only one problem with the accusation that science or scientists are fraudulent: It was science and scientists that determined that the teeth—two of them—belonged to a species of pig.

Unlike Nebrask Man, Piltdown Man was in fact a deliberate hoax. In 1908—or maybe in 1912 or something in between—an amateur archaeologist by the name of Charles Dawson discovered a remarkably human skull near a remarkably ape-like jaw.

Dawson was convinced they were associated; others doubted. Few suspected a deliberate hoax.

It was a hoax, though it was not discovered until 1953, when scientists were able to determine there was nothing ancient about the skull or the jaw. Both were modern, the skull human, the jaw orangutan.

Again, however, it was scientists who believe in evolution, not those who oppose evolution, who exposed the hoax, which was in doubt from the very beginning. In fact, it was a relief to be rid of Eanthropus dawsoni because it didn't fit well with other hominid fossils.

By the way, it is not known for certain whether Dawson was the perpetrator of the hoax or a victim, although he's obviously the prime suspect.

Nothing about the scientific hoax, Piltdown Man, looks prehistoric. That's a reconstruction on the left. Compare it with the authentic A. afarensis skull on the right. You'll notice Piltdown Man has no brow ridges, and the jaw juts out unlike any hominid. The orangutan jaw on the human cranium makes the skull look quite like a parrot.

As I said, anywhere you have humans involved, especially if there are many of them, you will have dishonesty. One horrid Japanese scientist, for example, by the name of Shinichi Fujimura, set Japanese paleontology back 20 years with his scientific hoaxes. He was planting artifacts at night, then finding them by day.

I know of not one single case where a scientific hoax, an attempt to foist evolution on the public, has been exposed by those who oppose evolution. Oh, yes, there are invalid accusations made by anti-evolutionists, but not one valid exposed hoax. 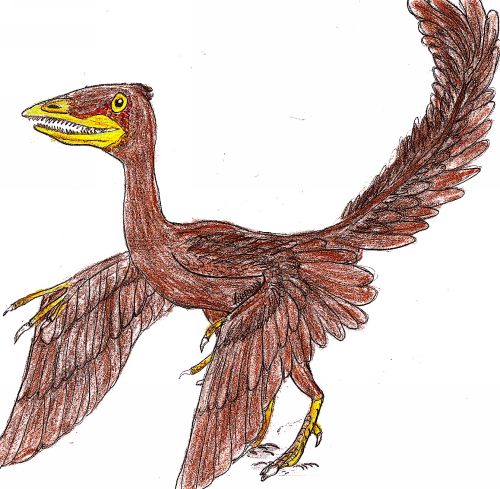 An example is archaeopteryx. Anti-evolutionists have taken numerous potshots at this important transitional fossil, but it stands as valid evidence of dinosaur to bird evolution. Recently, scientists moved it one step further from birds and closer to dinosaurs by doing intense analysis of growth patterns in archaeopteryx' bones.

This sort of thing, however, is not the revealing of a hoax, but the increase of knowledge through scientific study by scientists who are aware of the incontrovertible evidence for evolution.