Creationists win most evolution debates, but it's not because there's good evidence for their side.

I want to prove this to you below, where I have embedded a video in which Ben Waggoner turned the tables on anti-evolutionist Kent Hovind. He put the evolution side in the seat that the creation side is normally in.

For this page, however, it seemed impossible to avoid using "creationist" and "anti-evolutionist" interchangeably. Therefore, on this page, "creationist" means a Christian who opposes evolution.

Typically, what happens in a creationism vs. evolution debate is that the evolutionist presents a sweeping case for evolution. The theory of evolution is the result of a conglomeration of evidence from all fields of science. The evidence is overwhelming because it is so consistent across so many disciplines, but it is hard to present in a debate because there is so much of it. It is also difficult to present because some of it is too complicated for a non-scientific audience.

The creationist has no such task. He needs only to trip up the evolutionist. Since he doesn't have to make a sweeping case, he can devote his time to throwing out one tidbit after another, and those tidbits need only seem to make the evolutionist stumble. Thus, well-prepared creationists, like Kent Hovind or Ken Ham, show up with a long list of small bits of misinformation, misquotes, and outright falsehoods that serve the purpose of stopping the evolutionist and making him explain.

Complete falsehoods work best of all. If the creationist has invented a bit of scientific evidence that really doesn't exist, how will the evolutionist know about it, and how will he explain it?

One of Kent Hovind's invented pieces of evidence is a 70-foot tall giant plum tree supposedly found in northern Russia. A more honest researcher took the time to get a reference from Hovind, then track the reference, then track the reference given in Hovind's reference. He had to go four references deep before he found out that original find was a 20-foot alder tree, which was only notable because it was on an offshore island, a few miles further north than it is found today.

If the creationist can produce several pieces of "evidence," no matter how dishonest those pieces of evidence may be, and the evolutionist has no time to explain them all, then the creationist is sure to win the debate in the eyes of the audience. How can we believe in evolution, when there are so many unexplainable tidbits of information?

Of course, in a laboratory or in the field, scientists have all the time they need to pursue the truth of these creationist claims. Over and over and over, they are proven to be inaccurate, but there is no end to the claims.

I give two recent examples of creationist dishonesty in the text boxes below the debate video. I ran across these myself. The examples are typical of everything I've found for 15 years.

I hear creationists say all the time how they've researched the issues, and for 15 years I've been tracking down their claims without once finding one who had properly done his homework (a recent example). I've read both sides, dug deeper, and gotten to the root over and over and over again. The deceitful ones, very sadly, are the Christians. Scientists are human. They make mistakes, and some are dishonest. But the only side with a systematically dishonest and purposefully ignorant approach to the evidence is the Christian creationist side.

I hate that as much as you do, but it's true.

A scientist named Ben Waggoner, however, found a way to solve the problem. He engaged in a debate with Kent Hovind, and with a brilliant tactic, he put himself in the position of throwing out tidbits that Hovind had to explain. The result is a powerful win for the evolutionist.

I recently (June, 2011) attended a creationist conference in Birmingham, Alabama. Both of the follow example come from that conference.

At the conference, Terry Mortenson of Answers in Genesis represented the young earth view. While I was there, I picked up several of their videos.

In one of them, Dr. Mortenson brings up Pakicetus, a species considered by most to be an ancestor of whales. He quotes Dr. Philip Gingerich, one of the leading experts on the evolution of whales as saying that Pakicetus is "an important transitional form linking Paleocene carnivorous land mammals and later, more advance marine whales."

He then shows a slide of the fossil evidence at that time, which included only parts of the skull. This is the screenshot of the slide, which is taken from the Journal of Geological Education: 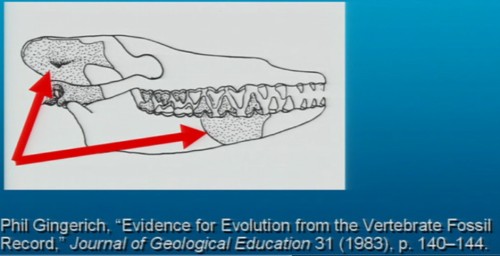 Dr. Mortenson presents this slide as though it is laughable that they built a whole species from so little in the way of fossils. He shows another slide with a drawing of Pakicetus as a dweller in shallow water that turned out to be a highly inaccurate drawing. Later findings showed Pakicetus to be a land animal.

What's dishonest about this?

Look again at the bones that were found in the diagram above. Do you notice that it includes the bones of the ear? Cetacean (whale) earbones are unique among all mammals. Consider this quote:

When Gingerich looked underneath the skull, he saw ear bones. They were two shells shaped like a pair of grapes and were anchored to the skull by bones in the shape of an S. For a paleontologist like Gingrich, these ear bones were a shock. Only the ear bones of whales have such a structure; no other vertebrate possesses them. (Carl Zimmer. I'm not sure the quote is referring specifically to Pakicetus, but the point is that cetacean ear bones are unique.)

It wasn't worth mentioning any of this, just showing a slide giving an impression that really isn't accurate?

In the context of this page, the truth is that creationists devote their time to finding inaccurate potshots like this.

Having seen the video Judgment Day - Intelligent Design on Trial in which Behe's Bacterial Flagellum argument was torn apart by the very scientist he had quoted as support, I was shocked to hear him present the bacterial flagellum as an argument for his irreducible complexity argument.

I'm supposed to tell you that I get a commission if you buy that Judgment Day video. The link just takes you to Amazon. You are not purchasing anything by clicking on it.

As an aside, Michael Behe was an exceptionally charming speaker. I was astounded at how likeable he was, as well as by how much he looks like Richard Dreyfuss.

The next day, after a question and answer session, I listened to Behe talk with several men who cornered him before he left. This was a church, so most people were on his side. The post-session questions tended to be polite softballs.

Nonetheless, one of the men asked him about the fact that the bacterial flagellum isn't really irreducibly complex. The flagellum of that species has 15 proteins in it. Another bacterium has an appendage with 7 of those 15 proteins and no others. That appendage is used to inject poison into prey.

Apparantly Michael Behe is never rattled. He maintained his charming disposition as he explained that the relation between the two appendages is closer than we knew. Not only is the injection mechanism in the other bacteria a subset of the proteins that make up his supposedly irreducibly complex flagellum, but the bacteria with the flagellum actually uses the injection mechanism of the other bacterium to pump the extra proteins out of itself to make the assembly that completes the flagellum.

Wow! What an example of evolution!

Dr. Behe managed to miss how this destroys his irreducibly complex argument. He gave two reasons that his argument still stands: 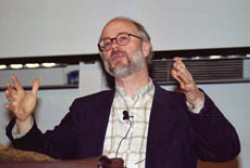 Michael Behe
Picture by University of Maine. Used with permission.

I'm not sure what to say in response to this. Like I said, Dr. Behe was really charming. I hate to charge him with dishonesty, but it's that or stupidity. Maybe there's something about being bent on an argument that makes you blind to what's being said to you. Blind seems better than dishonest or stupid.

As to his second point, he originally argued that the flagellum was irreducibly complex. Obviously, it's not. So now he wants to make both mechanisms irreducible complex. We have to suppose that when scientist find another bacterium using 3 of the proteins rather than 7, Behe is going to argue that all three are irreducibly complex.

The same thing happens with anti-evolutionists and "missing links." They demand a link between one species and another, but when scientist find it, they say that link has created two new ones!

It's simply not true that science is some large conspiracy. Evidence comes in, and scientists together, with a lot of argument, reshape their model to fit the new evidence.

I once heard Charles Colson accuse scientists of "changing what they say any time new evidence comes in." I'm pretty sure, Mr. Colson, that is what they are supposed to do! It's clear, though, that creationists aren't doing that. I hope the debate above helps give a better picture of what is really happening.