There are flood myths from all around the world. Do these help establish that the Genesis flood of Noah was a worldwide flood?

John Morris, of the Institute of Creation Research, argues:

One of the strongest evidences for the global flood which annihilated all people on Earth except for Noah and his family, has been the ubiquitous presence of flood legends in the folklore of people groups from around the world. And the stories are all so similar. Local geography and cultural aspects may be present but they all seem to be telling the same story. (ref)

Morris claims that "the stories are all so similar" and that this is "one of the strongest evidences for the global flood." 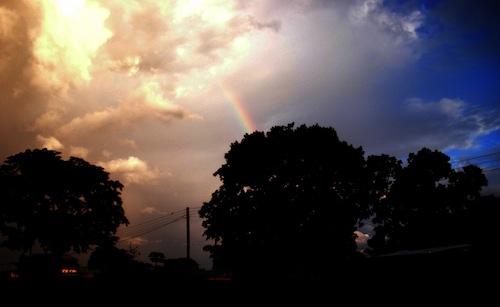 What is true is that flood myths are indeed "ubiquitous." Flood legends, a large number of them, can be found from every continent on earth and from virtually all island populations.

But are they really "so similar" to Noah's flood?

Morris doesn't actually include any flood stories with his claim except for one he made up. Howard Coates and W.H. Douglas, on the other hand, writing for Answers in Genesis (ref), include several stories with their claim that Aboriginal flood traditions are "surprisingly similar to parts of the book of Genesis."

The first story they cite goes like this (in my words to shorten the story to just the highlights):

A flood happened because men killed the old woman's third son, the one she loved. Angry about this, she speared a small hole in the sea, and the water ran out leaving the ground hard and dry. That's when the mountains were made. The old woman picked up turtle and fish and took them to the top of a hill called Nowulu. She dug for water on top of the hill, and the sea went back, drowning everyone as it did. The only ones who survived are the ones who climbed up on mountains. The survivors then made themselves into turtles and fish and now those of that generation are the living creatures in the sea.

Coates and Douglas then list some "similarities to Genesis" after they cite the story, which is not nearly as understandable on their page as I have given it here.

Really, I'm at a loss here. Similarities to Genesis? What similarities?

The third of those isn't even true in reference to this story. The flood didn't cover all the mountains. The story they tell is very confusing, and it's possible that it is saying that only those who climbed on one particular mountain were saved, in which case maybe they mean that the flood washed over all the mountains but one. 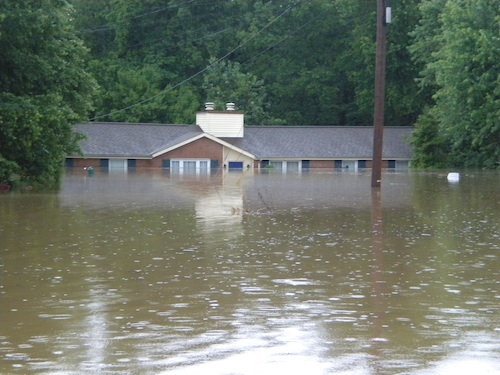 Nashville, Tennessee in 2010. Image taken by a friend of mine.

Either way, is this flood myth really evidence that the Genesis flood of Noah was worldwide? Is a worldwide flood really the best way to explain the origin of this Aborigine flood myth?

I think the answer is, obviously not. There are many ways to explain why an Aborigine culture would have such a legend, and it seems to me that one of the least likely origins is that there was a worldwide flood in which one family from the Middle East survived!

Perhaps the best way to take an honest, logical look at whether flood myths across the world are excellent evidence for a worldwide flood in which only Noah survived is to look at the similarities in these stories as presented by John Morris himself (linked above).

He gives these similarities, using as his source over 200 flood myths that he has collected from "missionaries, anthropologists, and ethnologists." The similarities are as follows:

Let's just stop there. He has several more, but they are no more effective arguments than these. (Two of them, in fact, only apply in 7% of flood myths according to Morris!)

Right now, though, I have to ask, what in the world does he mean, "Was the geography local?" Exactly how is that a flood similarity? How does anyone tell a flood story without using local geography? In fact, how did Morris find 18% of stories in which the geography wasn't local?

Actually, there is no way to know what Morris means by local geography from the article, but that's the point. All of these are a stretch. In 67% of the stories animas were saved, but he also adds that animals played a part in 73%. What exactly happened in the 6% in which animals played a part but were not saved?

There is an Australian flood story in which a large snake causes a flood after he smells a woman's menstrual blood in a pond. The snake survives the flood by standing on his tail so tall that he reaches to the clouds. Is this a case where animals play a part but are not saved? And does the fact that an animal played a part somehow indicate that Noah's flood was global?

Let's see if we can come up with some alternative reasons that flood myths would contain the above features. 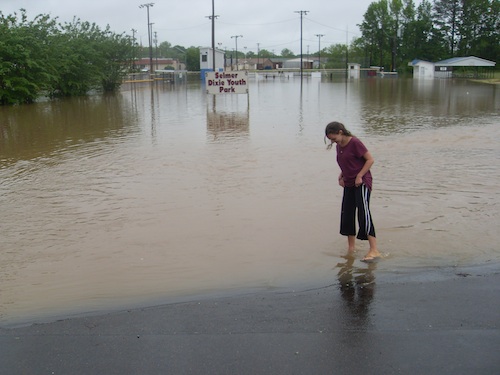 A wicked storm in May, 2010 gave us our own beach at the park in Selmer, Tennessee

Is there a favored family?

According to Morris, this only happens in 2/3 of flood traditions. Since most flood myths involve gods, there are actually two ways that the "favored family" is forewarned. One is the way Noah was forewarned. He was informed by the same God who was causing the flood. In the Sumerian legend, however, Ziusudra is warned by one god of the wrath of another.

Is flood due to the wickedness of man?

Again, according to Morris, this only happens in 2/3 of flood traditions. Is it really any surprise that floods are attributed to the wickedness of man?

Most ancient societies sought to appease their gods in order to prevent disaster. If their prayers and sacrifices are not heard, and disaster comes, what else are they going to attribute the disaster to than their own wickedness? The only alternative is that their gods are wicked or weak. In some flood stories, the flood is indeed attributed to the wickedness of the gods, but it should not surprise us that in 2/3 of them, the wickedness belongs to man. 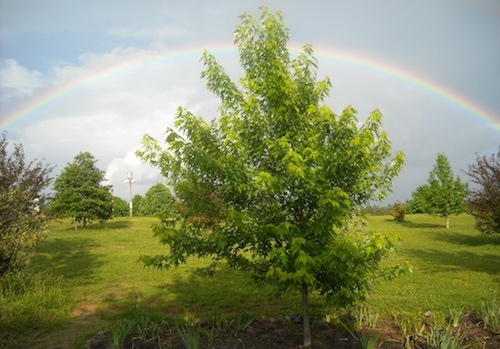 You don't have to read Genesis to know that rainbows indicate the end of storms.

Is catastrophe only a flood?

Here we get to the heart of the matter.

Until recently in history, most people lived near water. Water is essential to survival, and both rivers and oceans are prone to flooding. Even the United States can cite numerous disastrous floods just over the last decade. If we include the world, then massive floods causing hundreds of thousands of deaths have hit Japan, Myanmar, India, and Sri Lanka in the last decade. Only earthquakes and volcanoes can compete with the ferocity of a flood.

Further, why would the fact that the only catastrophe in a flood myth is the flood itself be a surprising similarity? Do floods need some kind of help to produce massive destruction?

Was the flood global?

I'm being facetious when I say that, but I'm making a valid point. Whether a flood is global is entirely subject to the interpretation of the hearer of the story. I have read many flood stories in preparation for this page, and not a single one suggests that it is global. And contrary to the confident, eyes-clenched-shut approach of Morris and those who agree with him, Genesis is not clearly a global flood, nor even likely a global flood.

Terms like "earth," when found in Genesis, are a matter of the translator's choice. The Hebrew word erets is used in the Bible of the land of Canaan, tribal territories, and even of the inhabitants of a local area. In fact, the King James Version translates erets as land in 60% of the 2504 times it is used in the Hebrew Scriptures.

Further, even if erets could only mean earth, that still wouldn't establish a global flood. How many times have we said something like "the smartest man in the world," when what we really mean is "the smartest man I know"? The Bible is constantly using such terminology, such as when Daniel interprets Nebuchadnezzar's vision of a giant statue. In Daniel 2:38, he tells the king that he rules "wherever the children of men dwell," yet we know that people in China had never heard of him, nor was he ruling over Celtic tribes in modern Europe. In the next verse, Daniel says that a third kingdom, of brass, will rule over all the earth. Bible scholars, even those that believe in a global flood, interpret this kingdom of brass to be Greece. Under Alexander the Great, the Grecian empire extended even into Persia, but it most certainly did not rule over "all the earth."

Is survival due to a boat?

These points of similarity are irrelevant, almost to the point of absurdity, and this is one of the best examples. How are people going to survive a flood except in a boat or on a mountain?

Seventy percent of flood myths, Morris says, involve survival in a boat. Should we really attribute this to the oral preservation of the one true flood survival story passed down through the generations? Or is it not far more likely that the society preserving the flood myth really had a flood in which someone, or more likely many someones, survived in a boat. Or, if it is just a story meant to illustrate a moral in the way that Aesop's fables do, then the society put a boat in the story because that's a logical way to survive a flood.

It's more surprising, perhaps, that only 70% of flood myths involve survival in a boat. Only the fact that mountains, and sometimes trees, and in one case, a seven-story building on a mountain, are involved in these stories explains such a low percentage.

No one, not even the worst skeptic, doubts that there was not only a massive flood in the Middle East, but that there have been many. Skeptics do doubt that Noah's story is anything more than an evolved form of Babylon's Gilgamesh story. Abraham, remember, was a Babylonian, and Moses was his descendant.

On the other hand, skeptics can't prove that Noah's story descended from Gilgamesh any more than Christians can prove it is original and accurate.

The evidence that Jesus Christ wants to present for the Christian faith, according to the Bible, is the unity, love, and transformed lives of Christians. If we want the world to believe the Bible, we are going to have to begin by presenting them some evidence that it's worth believing, that it produces what it says it will produce. That evidence has proven sufficient at bringing people around to faith in the Scriptures, and it is continuing to prove sufficient every day.

Arguments like these, trying to prove that Noah survived a worldwide flood because 70% of flood myths around the world involve a boat, just make Christians look foolish and close-minded. We would do far better devoting our time to finding out why the majority of those who call themselves Christians don't have enough love to get along with each other.