A Literal Interpretation of the Bible?

Who embraces a literal interpretation of the Bible?

Not the staunchest young earth creationist; not the most fundamentalist Bible-thumper; no one.

Everyone adjusts the Bible for science.

*May, 2017 note: I have encountered someone on Facebook who seems to really believe that the earth is flat and stationary with the sun going around us. By everyone I mean everyone except her and any others like her.

What does a Literal Interpretation of the Bible Really Tell Us?

Do you see the problem here? There are waters that are above the sun, moon, and stars!

Above doesn't even mean anything in reference to the stars. There is no "up." There is no "down." Thus, there is no above or below. 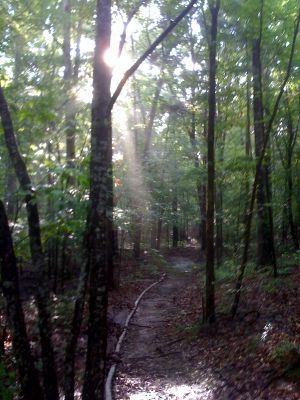 The only possible way that this reference to the firmament/sky that contains the sun, moon, and stars could be literal is if there were a band of water completely surrounding the universe. (I hope I didn't just invent a new creationist theory!) That's a lot of water!

The reason there are waters above the firmament/sky is because that's where the rain is supposed to come from!

Job, probably the most ancient of the Old Testament books, refers to the "treasuries of the snow" that God has. The Book of Enoch, quoted in Jude, says the same is true of rain:

The spirit of dew has its abode in the extremities of heaven, in connection with the receptacle of rain … and when the spirit of rain is in motion from its receptacle, angels come, and opening its receptacle, bring it forth. (ch. 59:12, translation by Richard Laurence, emphasis mine)

In a creation story as ancient as the one in Genesis, it's not surprising that the sky is a "firmament"—something hard ("firm"–ament)— and that it has water on top of it with which to produce rain. Later Scriptures have better science. Both Psalms and Jeremiah attribute rain to vapors ascending from the ends of the earth (Ps. 135:7; Jer. 10:13; 51:16).

I know that those who hold to a literal interpretation of the Bible will question what I just wrote. I challenge you to find an alternative, plausible explanation for waters that are higher than the sun, moon, and stars.

I've never seen any sort of explanation for the waters above the firmament that is scientifically accurate and agrees with Genesis one. Perhaps, though, someone will one day find one.

Remember, though, the issue is not whether Genesis is correct, but whether it is literal!

This issue is devastating to a literal interpretation of the Bible, at least about science, but the next issue is even worse!