There are two major myths about missing links:

This page will list intermediates that have been found and send you to pages for more thorough descriptions. We'll address just the most important ones. 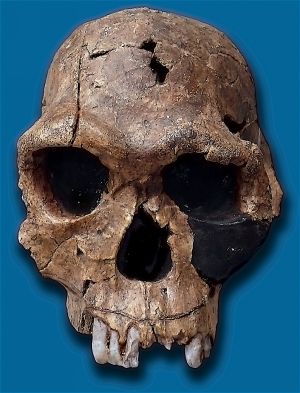 The most important missing link, surely, is Lucy.

Don't get confused. Lucy is just the first skeleton, about 40% complete, of her species, which is Australopithecus afarensis. A. afarensis is an upright-walking, long-armed primate with a brain just larger than chimpanzees.

We should also cover Homo habilis. Homo habilis was much more human, classified in the Homo genus rather than Australopithecus ("southern ape"). The habilis species designation is a reference to his tool use.

Homo habilis is so excellent an intermediate that both scientists and anti-evolutionists have trouble classifying it. Some scientists want to make it multiple species, while some classify some habilis fossils as Australopithecine and others as Homo erectus.

Some say that Lucy is a hoax. She wasn't.

Due to a late 2009 report, Lucy is now the second most important transitional hominid.

Gish in 1979 tentatively accepted 1470 as fully human. By 1985, he seemed to have reversed that opinion, and was suggesting that it should be placed in the genus Australopithecus… Lubenow concludes that 1470 is fully human. So two of the foremost creationist experts on paleoanthropology are both certain that 1470 is not intermediate between human and ape, yet one of them thinks it an ape, and the other thinks it is a human! There could be no more convincing demonstration of its transitional status. (Talk Origins archive)

Despite the fact that Duane Gish may have reversed his opinion in 1985, his difficulty in determining whether ER 1470 is human or ape is, as Talk Origins claims, convincing evidence of Homo habilis status as a (no longer) missing link .

Transitional fossils don't get any better than those in the descent from 4-footed Pakicetus to fluked whales. In Natural History Magazine in May, 1994, Stephen Jay Gould said this about one of the whale "missing links," Ambulocetus: 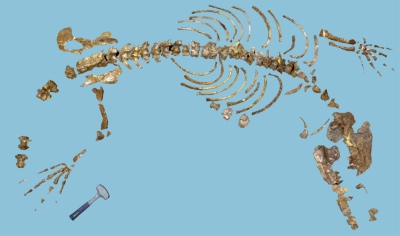 If you had given me a blank piece of paper and a blank check, I could not have drawn you a theoretical intermediate any better or more convincing than Ambulocetus.

The fossil ancestry of humans and whales are two of the best attested lineages, supplying abundant transitional fossils. There are many more; so many that they could not possibly be listed here.