Polystrate Fossils and the Geologic Column

There are numerous polystrate fossils, mostly trees, that protrude through several strata of the geologic column. Is it really possible these trees survived while being buried for millions of years?

The presence of fossils that penetrate many layers is a major problem for uniformitarian explanations. The cliffs at Joggins, Nova Scotia, present a prime study of polystrate fossil trees. These fossilized trees pass through many of the layers of the exposed cliff face. If the layers represent many millions of years, how were the trees able to stand upright without rotting away while they were slowly buried?

Here's why polystrate fossils are not a major problem for evolution.

Most trees that protrude through various strata have certain things in common. 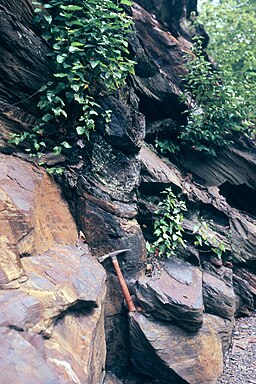 The prevailing young earth theory for these polystrate trees is that they were uprooted by the flood, then buried upright as the flood laid all the layers of the geologic column.

Besides the fact that the flood could not have laid the layers of the geologic column, the flood theory fails to explain the delicately preserved root systems found in the clay.

It is evident that when we find a bed of clay now hardened into stone, and containing the roots and rootlets of these plants in their natural position, we can infer, 1st, that such beds must once have been in a very soft condition; 2ndly, that the roots found in them were not drifted, but grew in their present positions; in short, that these ancient roots are in similar circumstances with those of the recent trees that underlie the Amherst marshes. In corroboration of this, we shall find, in farther examination of this [stratigraphic] section, that while some of these fossil soils support coals, other support erect trunks of trees connected with their roots and still in their natural position.

Who said this? Was this some scientist involved in the evolution-creationism debate?

No, it was J.W. Dawson, who wrote Acadian Geology in 1868, less than a decade after Charles Darwin wrote Origin of Species and started the evolution revolution.

Further, J.W. Dawson was a Christian, who ended his section on polystrate fossils with ...

Patient observation and thought may enable us in time better to comprehend these mysteries; and I think we may be much aided in this by cultivating an acquaintance with the Maker and Ruler of the machine as well as with His work.

So the occurrence of polystrate trees has been explained for 145 years. Current geologists give a similar explanation.

It is not my place to go into a long, deep explanation of these fossils. Excellent articles include the following:

In contrast to these well-referenced and educated articles—I feel obligated to be honest—creationists make blatantly incorrect, unresearched statements like this one ...

Since the proposal of the idea of uniformity by Charles Lyell in the early 1800s, geologists have struggled to explain polystrate fossils. (CreationToday.org)

They're struggling so hard to explain polystrate tree fossils that the Wikipedia article I referenced above provides 28 references, some of them to multiple articles, explaining polystrate trees, the majority of them in peer-reviewed journals, and all of them from scientific publications. They seem mighty successful for people who are "struggling."

The easiest way for creationist "experts" to convince their listeners is to create a caricature of science that is not true, mix it in with some misquotes and outright falsehoods, then make their caricature (in debate terms, their "straw man") the object of ridicule.

The problem is, geologists have not struggled to explain polystrate fossils. The first geologist to describe and explain them had no problem doing so, and he was a Christian. He did not lean to a flood, but to a build up of sedimentation.

Along with this falsehood, CreationToday adds a misrepresentation of science. "Uniformity" does not mean absolute uniformity. Everyone who has lived through a flood, a volcano eruption, an earthquake, a hurricane, or a tsunami knows that sometimes there are drastic changes in the environment that violate the principle of uniformity. "Everyone" includes scientists.

Polystrate trees are the result of "cataclysmic" events. At least, the events are cataclysmic for the trees and plants growing near the river or marshes that produced minor floods.

Geologists fail to accept that the only reasonable explanation of polystrate fossils is that the layers formed quickly around plant and animal life before they had time to decay. Seems to correspond with the biblical account of the worldwide Flood, doesn’t it?

No, it doesn't seem to correspond with the worldwide flood. The worldwide flood, according to creationists, washed back and forth over the earth, scouring it down to Cambrian bedrock. It then laid all the layers of the geologic column at once.

In what way does this jive with "layers formed quickly around plant and animal life before they had time to decay"? The flood would have uprooted those trees, which would have floated on top of the flood, settling only after the sediments of the geologic column had been laid.

Why do I have to point out something so obvious? There is no way any real research is being done, nor any global flood theory being seriously thought through, at least at CreationToday.org.

You will notice that the only references in their article are a creationist magazine, seminar, and book. You would think if you were going to assert that "geologists struggle to explain polystrate fossils" and "do not accept that layers formed quickly around plant and animal life," then you would go out of your way to quote some geologists as proof of this. Wouldn't you?

Geologists do accept that the polystrate fossils were quickly buried, after which the gradual accumulation of new sediments completely buried them. See the articles in the bullet list above.

The layers mentioned are not entire eras. Sometimes the multiple strata are simply coal, then various quickly deposited sediment layers. The coal comes from the plant life buried under the sediment layers during a minor flood.

I can't find any reference to an actual upside down polystrate tree except in unreferenced claims in creationist literature. If you know about something I don't, please let us know through the "contact me" link or the comment section below.

Even if there are such upside down polystrate trees, there are a variety of ways that could happen. A mudslide could carry tree down a slope partially buried, then layers could build up around it. It would have to happen somewhat rapidly, before the tree rotted, but that would not be unlikely at the bottom of the type of hill that could produce a mudslide. Repeated mudslides would bury a tree in layers as well.

I am going to include a comment form with this page. Feel free to discuss this and present your arguments or thoughts below.