William Dembski is the main proponent of the specified complexity argument. Though he got the term from Paul Davies' book, The Fifth Miracle, he applies it to evolution where Davies only applies to to abiogenesis, the origin of life.

Here is specified complexity as defined by Dembski: 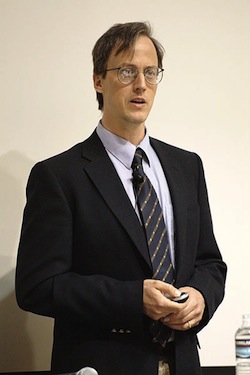 Life is both complex and specified. The basic intuition here is straightforward. A single letter of the alphabet is specified without being complex (i.e., it conforms to an independently given pattern but is simple). A long sequence of random letters is complex without being specified (i.e., it requires a complicated instruction-set to characterize but conforms to no independently given pattern). A Shakespearean sonnet is both complex and specified. (Why Natural Seletion Can't Design Anything. p. 1. Parentheses in original)

Once Dembski defines specified complexity, his argument is simple. "Evolution can't explain it to my satisfaction." Here's how he puts it:

Mutation is undeniable, and no one denies it, not even anti-evolutionists. The copying of genes from one generation to the next is not without error. There are changes in the genetic code between a parent or parents and it or their offspring in every organism.

The theory of evolution proposes that natural selection works upon these random, chance mutations to preserve the ones that are beneficial for survival. Scientists debate just how much of a role chance plays alongside natural selection, but evolution is impossible without at least some selection.

What is wrong with this evolutionary algorithm according to the specified complexity argument?

According to William Dembski, it's not "convincing."

There's no argument here. There's nothing but a statement by Dembski that he's not convinced by the theory of evolution.

Later in his article, Dembski makes some statements that make it sound like he knows what he's talking about, though he's said nothing at all that means anything at all. He talks about the "appearance" of specified complexity, and says that this is all that evolutionary algorithms can generate. Then, to sound even more like a scientist using accepted mathematical formulas, he ends by saying, "Does Nature exhibit actual specified complexity? The jury is still out."

This is all pretense. "Specified complexity" is not a real scientific term, and there is no official definition of it. There is no "jury" looking at the topic because the topic is all in Dembski's head.

Now he has done the same with his invented term "specified complexity," pretending like there's some real science involved.

For example, Thomas D. Schneider, a research biologist at the National Institutes of Health, wrote an article addressing Dembski's formulas. The first formula he addresses is pulled from a book on thermodynamics. Schneider uses the formula anyway to show that Dembski is wrong in denying "complexity," then says:

Having made this conclusion, does not mean that I condone this or any of Dembski's specialized terminology. I think that 'complexity' is a vague term with multiple conflicting definitions from many authors. It should be avoided. "Statistically significant" does the job just fine.

When Schneider addresses "specified," he writes:

That means that if only if Dembski says something is specified, it is. That's pretty useless of course. Later on he tangles it up with specificity, which is a terrible term.

In other words, William Dembski has made up his own scientific language, which is completely useless. Worse, because he's inept, he's confusing it with other real scientific terms, and because he's putting on a show, he's pulling mathematical formulas from real scientific theories and applying them to his own invented and useless terminology.

Here is a list of real scientists pointing out that Dembski is inventing his own terminology and misusing scientific formulas concerning both specified complexity and information theory:

With both specified complexity and information theory, William Dembski has simply made up his own science with his own definitions using mathematical formulas out of context and incorrectly. This is effective for fooling the masses, but real scientists are appalled.