I'm not a scientist. Why should I be telling you about Australopithecus sediba?

Well, because this very recent discovery—found Aug. 15, 2008 and described in Science Apr. 9, 2010—is fascinating even for the non-scientist, all the more so because I found comments about it from "Lucy" discoverer, Donald Johanson.

You can read the general facts about A. sediba at many sites, including National Geographic. Here, though, I want to tell you about it's potential role in the evolution of man.

It can be hard to keep up with scientific terminology, especially if you're not a full-time scientist.

Hominid used to mean humans and all species considered to be human ancestors, while the great apes—gorillas, chimpanzees, and orangutans—were called anthropoids. Now, however, genetic studies have shown that gorillas and chimps are more closely related to us than they are to orangutans, so now they are hominids with is.

So the term hominin means what hominid used to mean. It is us and our ancestors.

Australopithecus sediba provides an interesting twist to that hominin lineage ...

Most hominins have been found in east Africa, in Kenya, Ethiopia, and Tanzania, where the Great Rift Valley splits the earth for hundreds of miles, creating an awe-inspiring paradise.

My favorite explanation of this is that the South African species, Australopithecus africanus and robustus, are a branch off from the main lineage of man. A. afarensis migrated to South Africa, adopted a rougher, leafier diet, and developed larger teeth, a larger jaw, and a more robust frame to suit its new lifestyle. A. robustus represents the evolutionary dead end that descended from A. africanus, itself descended from A. afarensis. 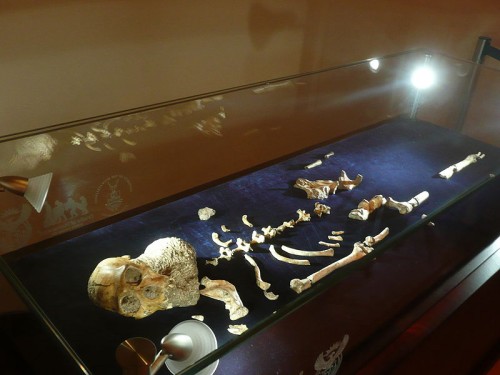 Australopithecus sediba skeleton on display. The skull belongs to the juvenile found. | Photo by Phiston, used with permission.

Australopithecus sediba throws a (very small) wrench into that explanation.

The study leader, Lee Berger, believes that A. sediba is a direct ancestor of man, probably evolved from Australopithecus africanus. I don't really understand that, because A. africanus, though it has a human-shaped jaw, seems to have reversed the trend towards smaller teeth and a more gracile (slender) build and developed into A. robustus with its huge molars, not into something with as many Homo traits as A. sediba.

So I really loved Donald Johanson's take on it ...

Johanson doesn't understand why Berger didn't just make sediba a Homo species. (It must be nice to get editorial emails from famous scientists like Scientific American did!)

Johanson believes that these Malapa hominids (Malapa is the site where the two individuals were found) are descendants of very early Homo species that migrated to South Africa. They are about a half million years younger than the earliest Homo finds in east Africa, so, as he puts it ...

Opinions and questions fly with the discovery of A. sediba, but the find is unlikely to change our views on anything. Anthropologist William Kimbel and Susan Anton, joint editor of the Journal of Human Evolution both feel that if it were labeled Homo, most of the discussion would go away:

If you put it in Homo, that problem falls away ... It's then just one of several species around two million years ago that are near the base of the Homo lineage. (National Geographic)

You might also want to see Ardipithecus ramidus, described in 2009, or Australopithecus afarensis, two much more likely ancestors of man found in east Africa.