Pierolapithecus catalaunicus, named from one remarkably complete fossil found in 2002, is an exciting discovery. It may turn out to be the last common ancestor of chimpanzees and humans!

Details About Discovery and Analysis of the Fossil

The fossil was discovered in 2002 and determined to be 11.9 million years old; however, Ashley Hammond of the Univ. of Missouri recently became the first to thoroughly examine the pelvic bone of P. catalaunicus. Her findings were published in the March 30, 2013 Journal of Human Evolution. 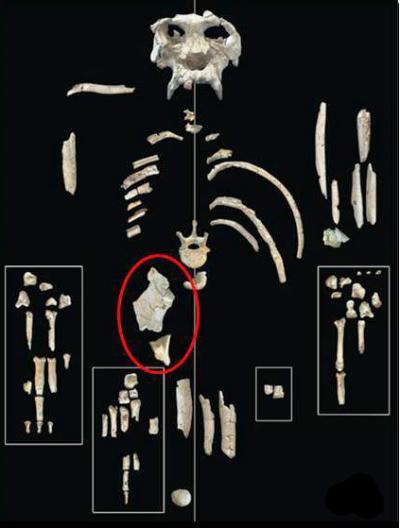 In this article, I am going to cite news articles because the actual journal article reads like this:

The P. catalaunicus ilium reflects incipient modifications of the basal hominoid torso for the more frequent use of orthograde behaviors described for this taxon on the basis of other preserved anatomical regions. (Online Extract)

This means that the pelvic bone she examined, the ilium, shows the beginning of modifications at the base of the torso—i.e., in the pelvis—to facilitate upright activity. The end of that sentence says that this "taxon," which is a reference to the genus Pieralopithecus, has been described as having an upright stance based on other parts of its body. Pierolapithecus catalaunicus seems to be partially upright, like the great apes, though not necessarily a knuckle walker.

Further, this ancient hominoid didn't have the hands to swing under branches the way modern great apes do.

Thus, P. catalaunicus was a climber, but not a swinger.

You may notice that in the quote above, Ms. Hammond is assuming evolution and drawing conclusions based on preconceived ideas about evolution.

The reason for this is that science is not waiting around to find a missing link that will prove evolution. Evidence for evolution is abundant, and the "preconceived notions" that Ashley Hammond brings to her research are based on that evidence; they are not assumptions.

Nonetheless, a find like this fills in one more spot on the evolutionary tree of humans. The fact that we continue to find fossils in the right places and of the right age to show a progressive lineage from small, tree-dwelling mammals to semi-upright apes to fully upright hominids is an impressive commendation for and confirmation of evolutionary theory.

Contrary to popular belief, we're not looking for a missing link. We have different pieces of the evolutionary puzzle and big gaps between points in time and fossil species. ... We need to continue fieldwork to identify more fossils and determine how the species are related and how they lived. Ultimately, everything is connected. (cited at Futurity.org)

Keep in mind that when we speak of descent, we are speaking in general terms that may not be specifically accurate. Descent from one fossil—or even from one species—to another cannot be proven. We can determine that species are related, but we cannot determine certainly that one is the ancestor of another. Evolution is full of dead ends. 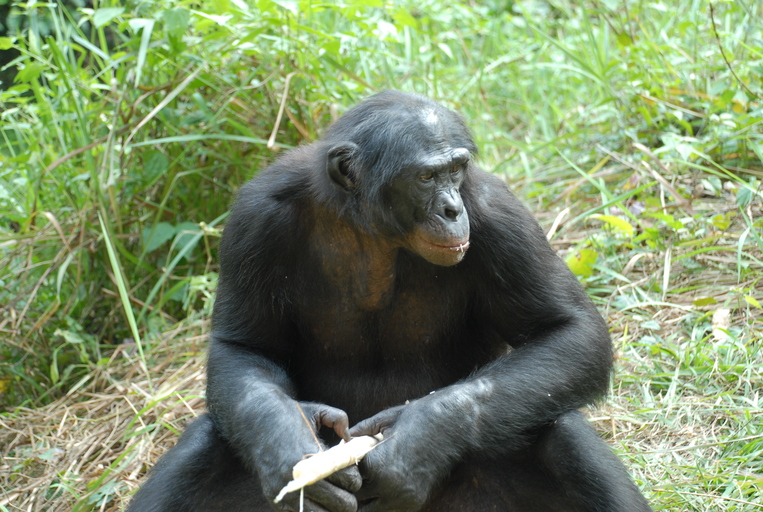 A Bonobo chimpanzee, considered to be the species most closely related to us. I have always been amazed by Bonobo hands, which are so similar to ours.

In this case, Pierolapithecus catalaunicus' ilium, the pelvis bone that Hammond examined, indicates a wider pelvis as needed for a more upright stance. It is older than any great apes, so we learn from this that the swinging from branches that chimpanzees, orangutans, and gibbons do must have evolved later.

By predating the great apes, yet also beginning an upright existence both in and out of trees, P. catalaunicus presents itself as a possible ancestor for both the great apes, including chimpanzees, and humans. This is a junction that scientists have been chasing after.

With so many clues to work with, it is likely that scientists will continue to find fossils that will pin down the time and characteristics of the divergence between man and ape.

The clues primarily include the fossils that we have already found. We know their dates, we know their development, and we know where they lived. We need simply to follow their path through time and through Africa to find the fossils they have left behind.

One of the fossils mentioned in the news articles is Proconsul nyanzae, a more primitive ape that lived about 18 mya. The path of our ancestors through the dawn of history becomes clearer all the time, and Pierolapithecus catalaunicus is one more light along that path.